A decade or so back, alongside a burgeoning academic career in a Media and Cultural Research centre as well as a fair bit of international travel giving keynote speeches at music industry events around the world, I’d also found some time to establish myself as something of a whisky writer.

As the son of a Scot, I imagined I was genetically pre-disposed – and while not an expert, I was an enthusiastic learner, and my journey of discovery provided the way in for the casual reader.

My friend Clutch, on the other hand, was the one with the deep knowledge and developed palate, and so it was a great double act. He’s the real deal: a Scottish composer who’d grown up surrounded by distilleries – and together (imaginatively branded ‘Dubber and Clutch‘) we established something of a reputation in the industry as “the whisky writers who use the internet”.

We ran online live tastings on Twitter (@Twhisky, naturally), blogged fairly extensively and operated in a far more digitally native and online narrative-led manner than was usual in the somewhat traditional world of whisky critique.

The fact that music also played a key part in what we did was of interest to a lot of the distillers and whisky companies. Alongside the tastings, distillery tours and writing, there was also some discussion of ways to incorporate our musical endeavours. In particular, there was a conversation with one distillery about a book project that paired albums with drams, which sadly didn’t come to pass (though of course I’m still open to the idea).

But there was one really interesting music and whisky project we were really pleased to get off the ground, and it was one that ticked an awful lot of my boxes: musical experimentation, innovation and media, culture and community, excellent whisky – and the opportunity to do something that would be of actual help.

The marketing manager of Whyte & Mackay had approached us because there was something of a crisis on the Isle of Jura – a small island off the West coast of the Scottish mainland with a population of 200 people, 6000 deer and a whisky distillery (theirs), which provided the main source of both employment and local pride. Funding had recently been pulled for the ferry service to the mainland which connected workers, their families, school children and visitors to the island, threatening both its economy and the Diurachs’ way of life*.

Clutch and I pitched a project idea in which we would travel to the island, stay in the famous Jura Lodge for a week or so, and in order to raise awareness and perhaps even some money toward the cause, Clutch would create and release a piece of music inspired by the island, its geography, traditions and people, and I would help him document and communicate that as an online ‘vernacular video’ project on a blog, by way of continuing the research I was doing into the communication of music and culture online, given the affordances of the medium.

KLF fans will know Jura as the island where the provocative pop duo burned a million pounds in cash. They may also be interested to know that my bedroom for the week at the lodge was officially designated ‘The White Room‘ – presumably the namesake of the famous album.

At around 10am on our first morning on the island, Clutch looked out the window from the stairwell, across the bay – and saw what you can make out in the picture at the top of this post: an array of buoys marking, we suspected, lobster traps or similar.

He called me over to point it out, and asked me (as I’m asking you now) to imagine five horizontal lines, with the buoys marking out a melody on a stave. I took the photo, he transposed it to some digital music production software, and we were off.

*Inhabitants of Jura are known as Diurachs.

The island itself providing the actual notation for the initial starting point was not only an organic and useful springboard into musical composition, but also a great focal point for the introduction to the conversation around the ‘social objects’ being created for the online research project.

I recorded interviews with Clutch as he went about his process – my working theory being that the story of the creative process would lead people to an interest in the finished piece, and that proved to be the case.

We received a lot of feedback on Twitter from people commenting on the music, the island, their love of the whisky and all manner of other peripherally related things, using these images, photographs and blog posts as starting points.

Sidebar: It’s incredible to remember just how different the internet and social media realm was 10 years ago. At the time, at least for me, the most top-of-mind, most convenient and perhaps even most widely used casual blogging platform, other than Tumblr (which is barely holding on by a thread these days), was the much lamented Posterous. It had the advantage of providing a blog that could accommodate all manner of rich media, and you posted simply by sending an email. I must have had a dozen different projects on Posterous, none of which now exist online after the whole thing was shut down in 2012 after being acquired by Twitter. 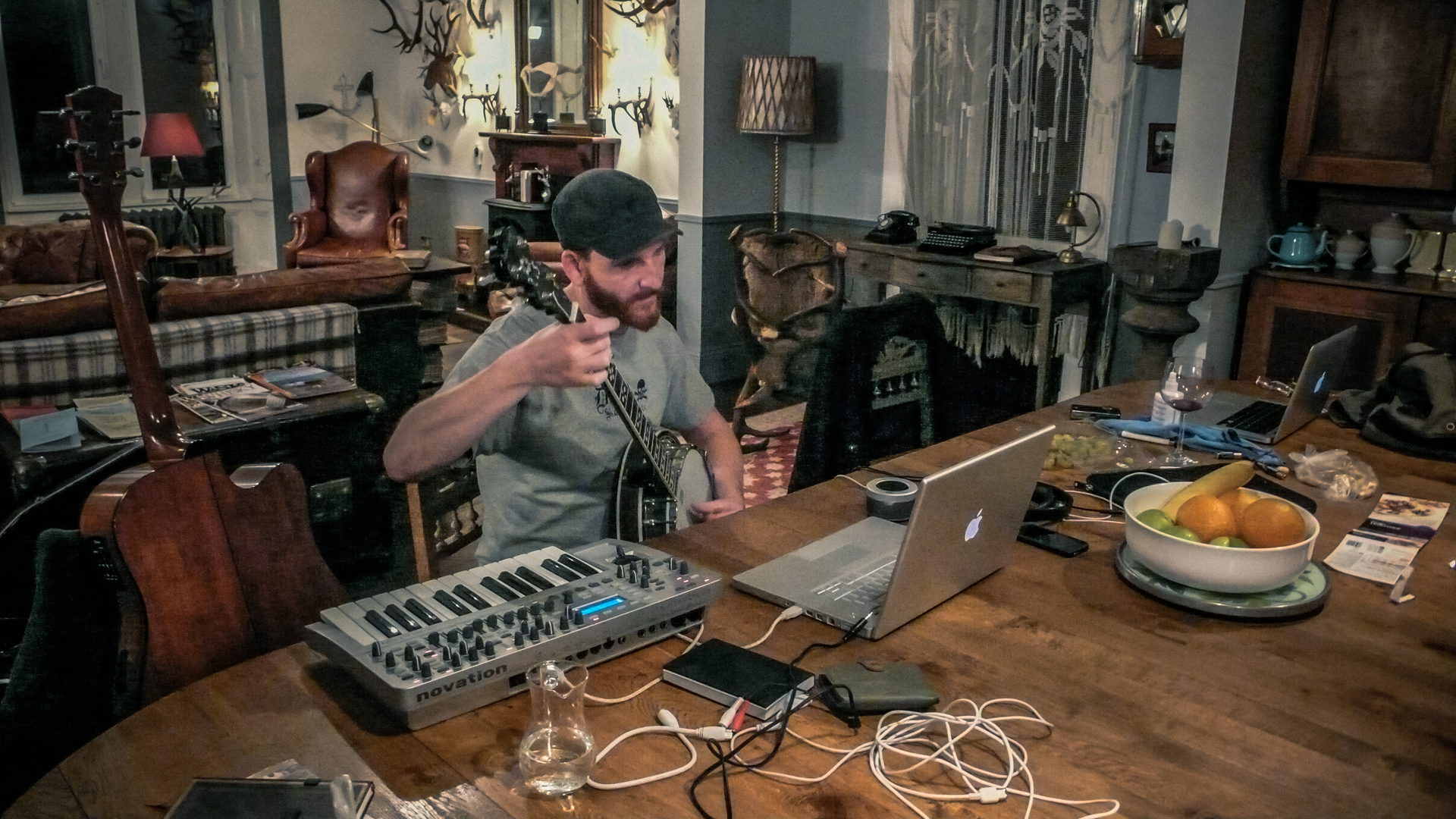 Clutch had a variety of musical instruments with him, as well as a laptop packed with recording software and some outboard equipment. The project required concentrated effort on his part to write the music, perform and record it and his process was to build it up in layers, edit and refine as he went, taking away almost as much as he was putting in.

Even so, there were several trips on the island’s solitary road to take in the scenery, view the deer and visit the locals. The inspiration for the music came from a range of different sources – from the feel of the natural surroundings to the character of the Diurachs* themselves.

To involve the community further, Clutch had the idea of bringing the local school on board. Small Isles Primary school has just 11 students and two classrooms. We met with the teachers, presented the project to the children, then asked them to join us in creating the music.

Clutch laid out plastic staves on the ground and directed the children, while I stood unsteadily on the roof of the Jura Hotel, camera in hand.

Like a game of statues, but for musical composition, the children ran around randomly until the call for them to stop was given, where they remained in place and I documented the melody that they created. It went well for a while until they all ended up running off to one side to watch the far more interesting pod of dolphins that had arrived in the bay. 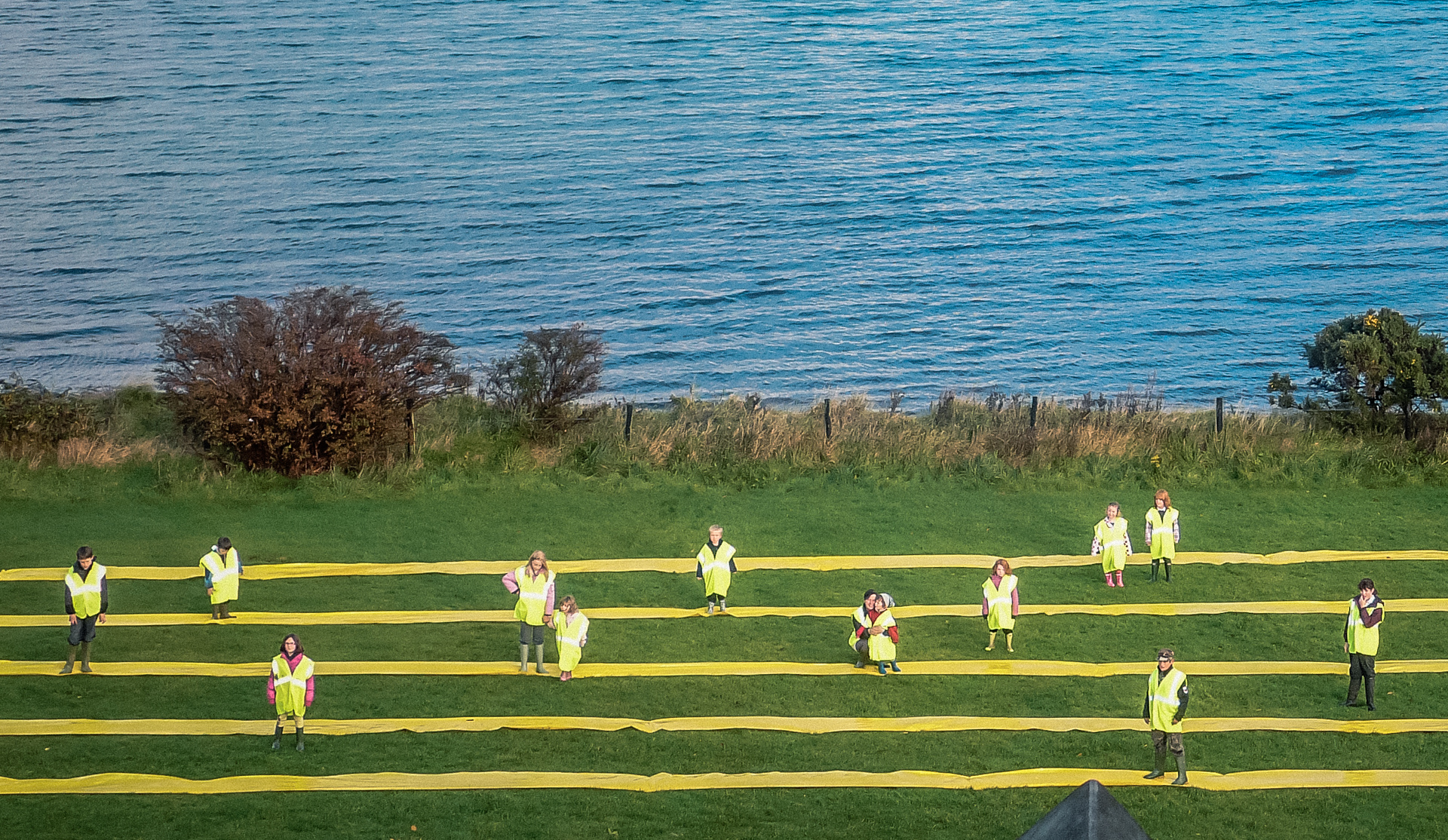 We were not only given the run of the Lodge, the distillery, the hotel and the pub, but also the village hall which was being prepared for a ceilidh. The distillery supplied a few barrels for Clutch to repurpose as percussion, and we asked around to see if there were any local musicians who might be able to contribute.

We learned that not only was there an exceptional Scottish smallpipes player working in the distillery and, perhaps more surprisingly, that the island boasted a recording studio owned and run by Giles Perring with artists visiting from all over the world to create their albums in residence, but also that Sheena Amos, the young barmaid from the hotel who had taken an interest in our work, just happened to also be a classically-trained flautist.

We put all of these ingredients into the mix – both in the online narrative and in the music. 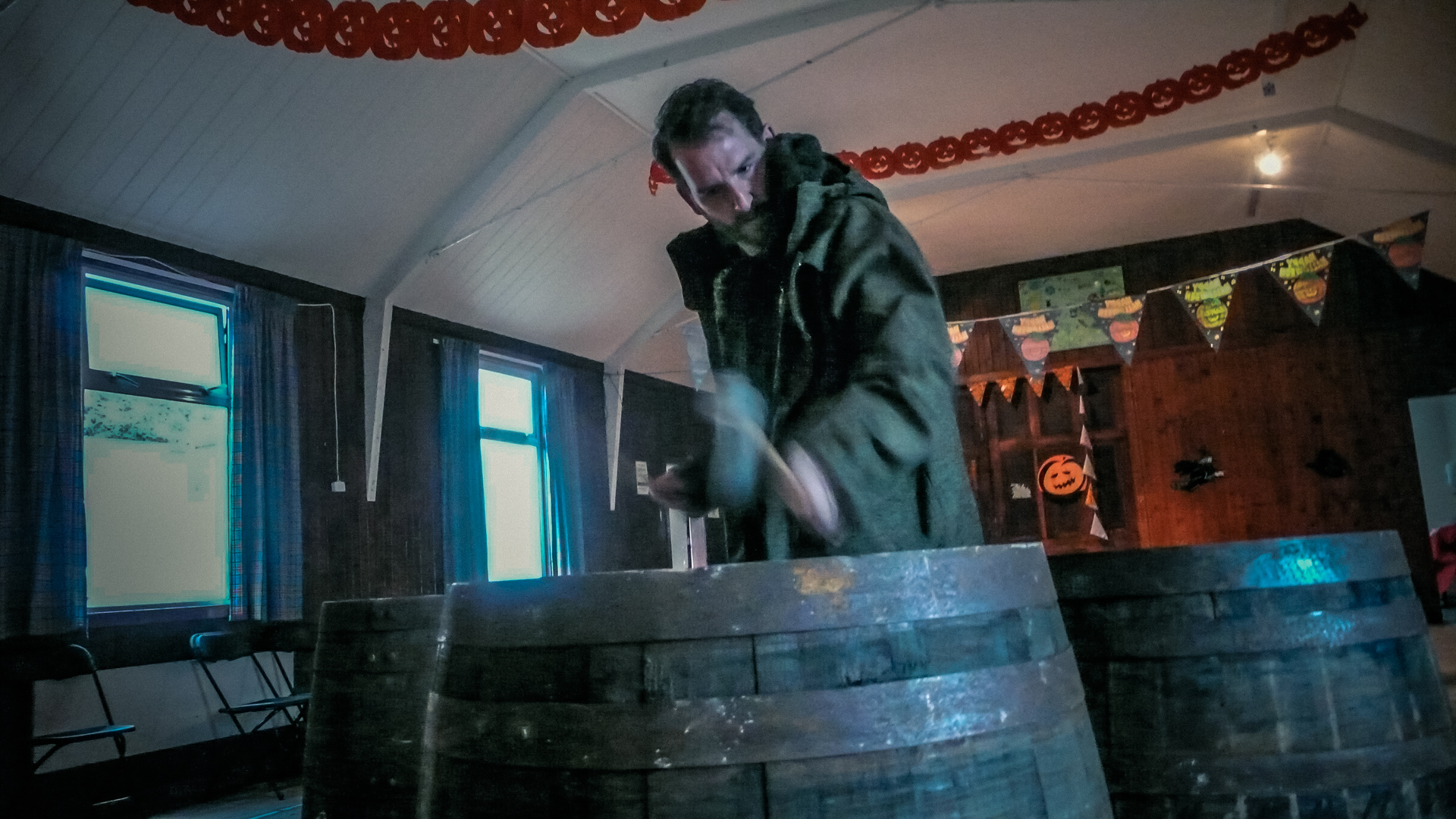 We finished our stay on Jura with an almost completed track and a really lovely online project with interviews, musical excerpts, scenes from the island and video diary entries. Clutch returned home to complete the vocals for the finished song and I wrote up the results of the research project, as well as a report for the marketing department of Whyte & McKay.

I also cut together a sort of highlights video to accompany a rough mix that Clutch provided me with to conclude the project and released it as we left the island. The music contains percussion played on the whisky barrels, the sound of the school kids stomping and clapping in the village hall, Sheena’s flute, the smallpipes, and everything from an eBow to a banjo. It was written by Clutch in close collaboration with the landscape, the people and the spirit of Jura itself.

The video montage below gives perhaps the best quick overview and insight into our time on the island.

The recording of the final work happened to coincide with the release of a 200-year anniversary of the island’s whisky, and we were very honoured to be offered a special tasting of the extremely limited bicentennial commemorative edition. 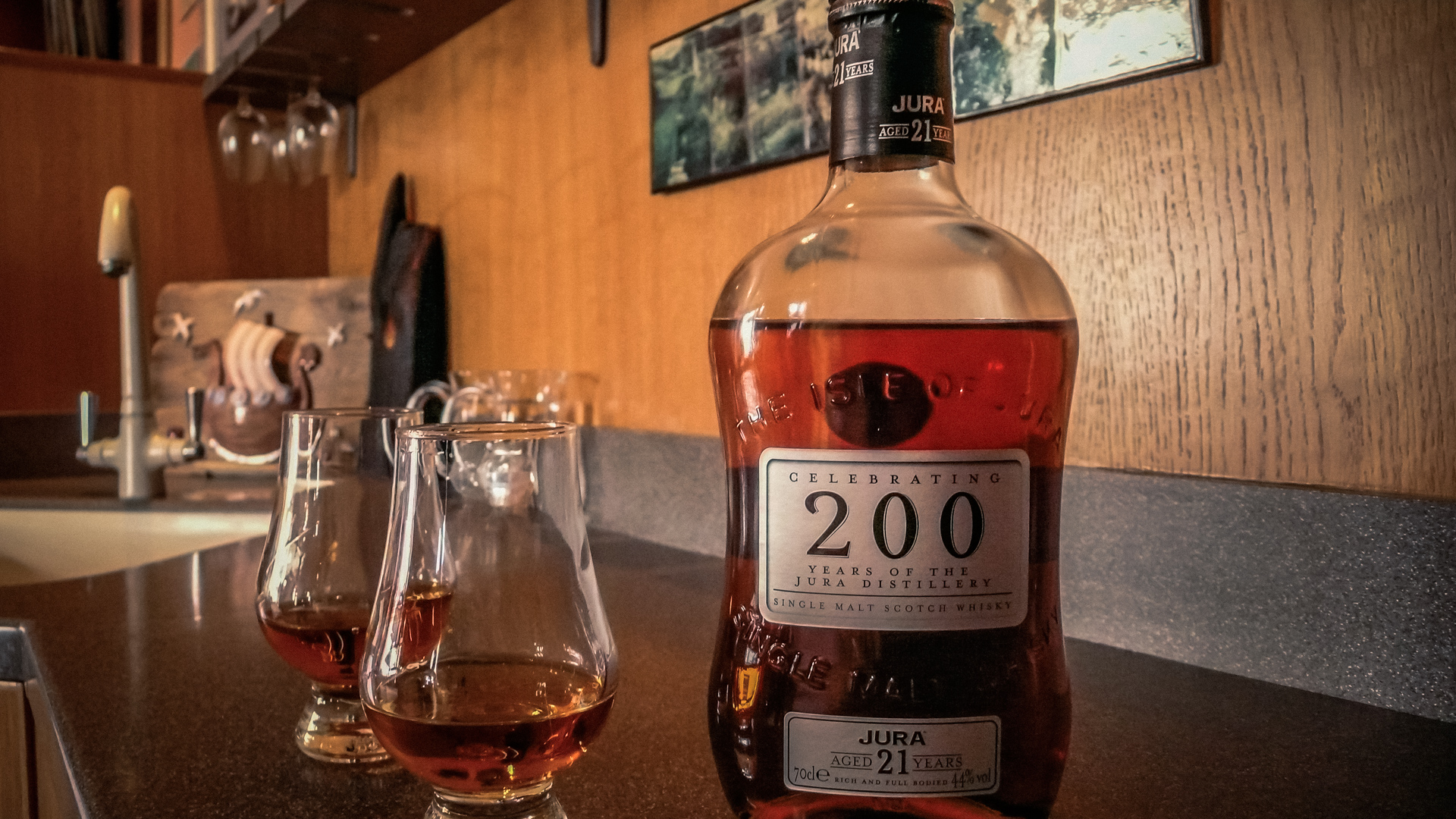 Reflecting back on the Jura Project, it’s amazing to think how many mini-adventures happened during our stay on the island. Our almost-visit to the home and writing retreat of George Orwell, the night of the ceilidh itself, which was one of the most joyous events I’ve had the privilege of attending, the Halloween party and the ghost cat at Jura Hotel, the drive to the top of the island, the Fell race (in which neither of us participated, but the runners of which we applauded and cheered), and the tour and tasting with Distillery Manager Willie Cochrane, who was facing one of the distillery’s worst crises since it opened.

Remember that the whole point of the exercise was the discontinued ferry service – limiting the raw ingredients coming into the island, stopping the steady inflow of supplies, preventing cars from accessing or leaving the island, hindering workers and all but preventing the older teens on the island being able to get to their secondary school, which had always been just one boat ride away.

This is another of those projects I plan to one day reconstruct with all of the footage, photography and writing that happened. For now here’s just a taste of what we did.

In the meantime, Clutch is now completing his Masters degree in Music and the Environment at the University of the Highlands – and doing very well. 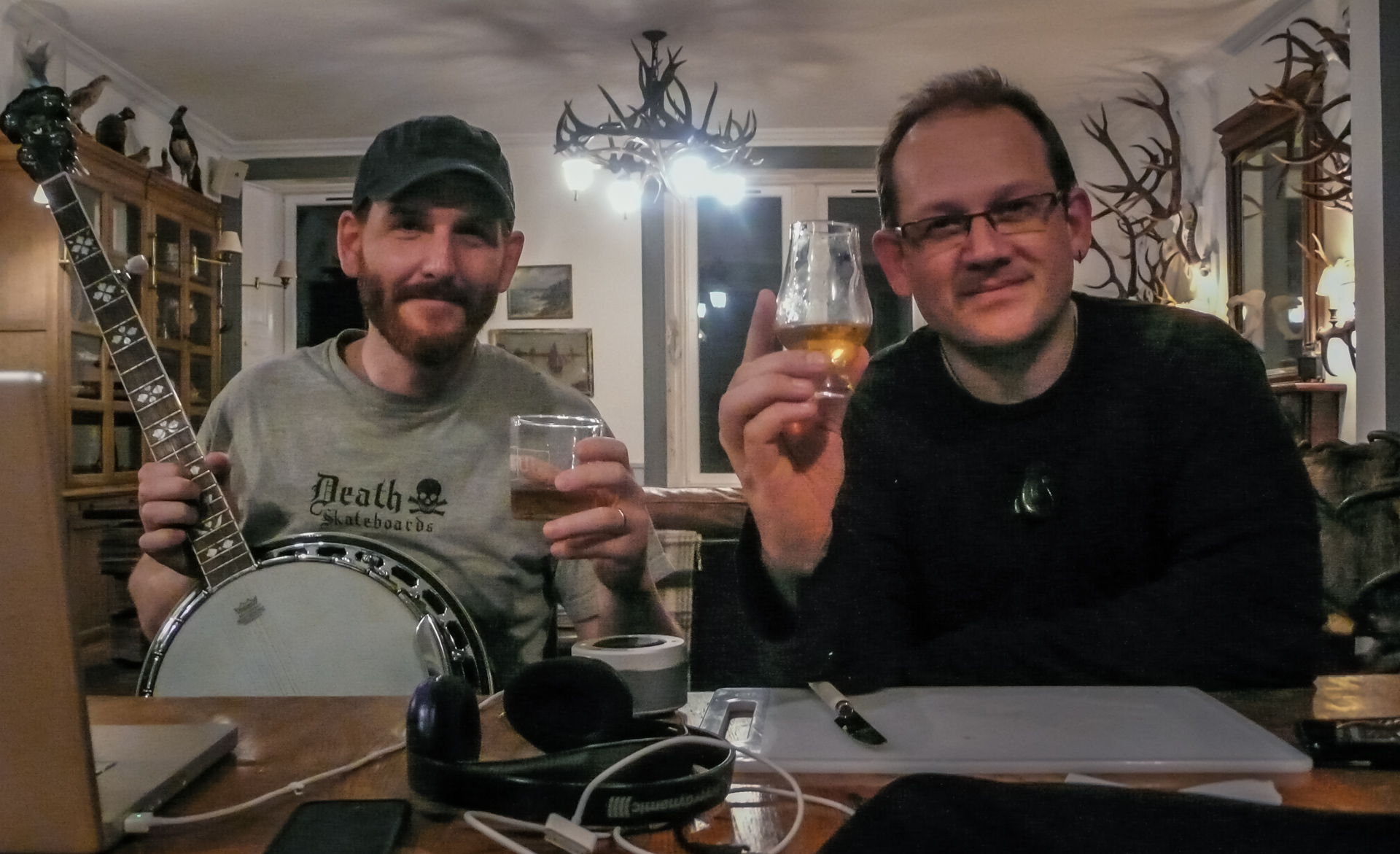 This post is part of a series about my work and the diverse projects that add up to my career so far.

Table of contents for Curriculum Vitae 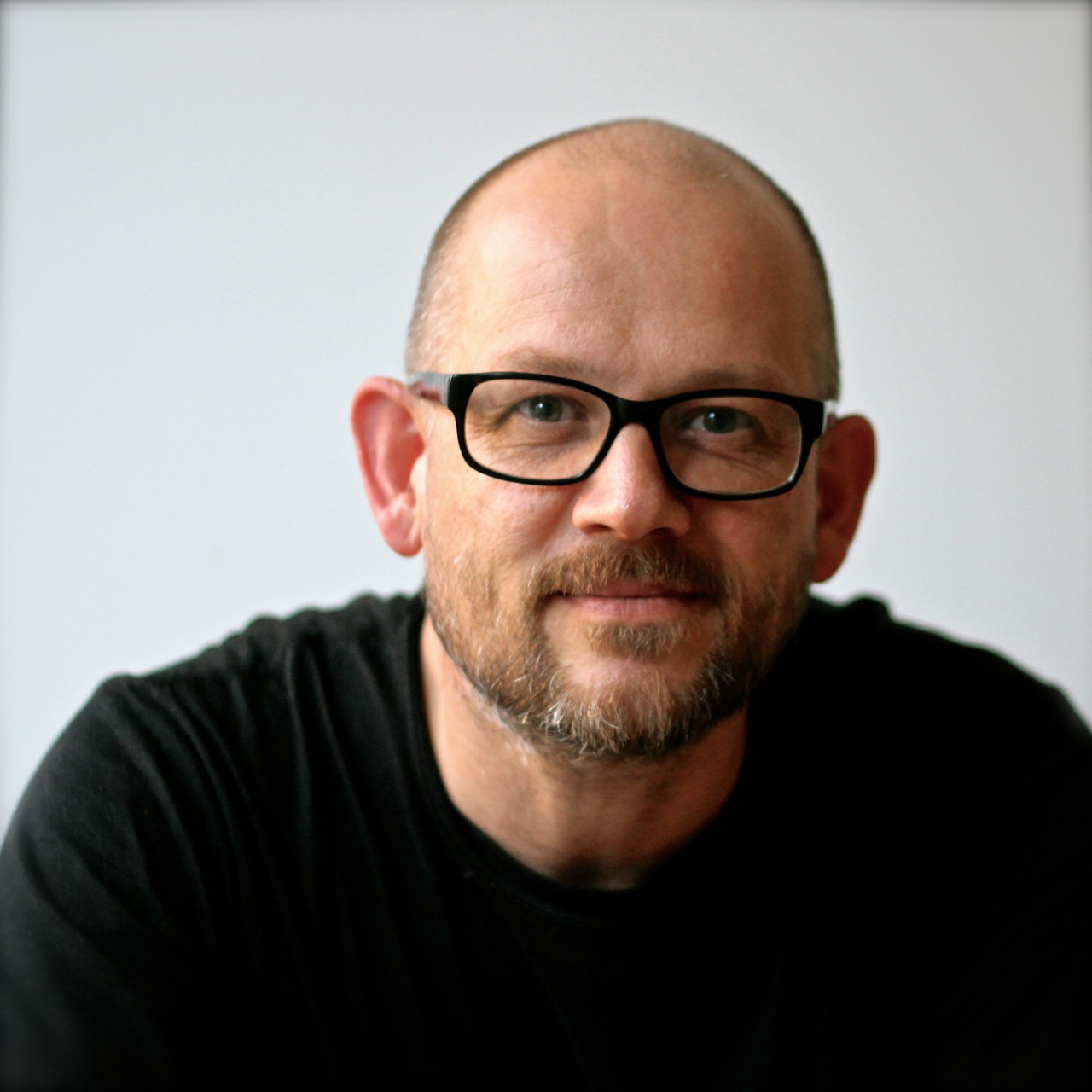 Andrew Dubber is the Director of Music Tech Fest and author of books about technology, culture, music and radio in the digital age.